By Blair A. Silver*

On June 10, the U.S. Supreme Court, in a 6-3 decision in Return Mail Inc. v. U.S. Postal Service, No. 17-1594, held that a federal agency is not a “person” able to seek inter partes review, post grant review, or covered business method review of an issued patent.

Return Mail, Inc., sued the United States Postal Service for infringement in the U.S. Court of Federal Claims.  The Postal Service petitioned for CBM review of the asserted patent, and the Patent Trial and Appeal Board (Board) held that the claims were directed to ineligible subject matter.  The Federal Circuit affirmed the Board’s decision, over a dissent, additionally holding that the government is a “person” eligible to petition for CBM review.  The Supreme Court granted certiorari to determine whether a federal agency is a “person” capable of petitioning for post-issuance review under the AIA.

Writing for the majority, Justice Sotomayor first noted that the patent statutes do not define the term “person.”  Instead, there is a “longstanding interpretive presumption that ‘person’ does not include the sovereign.”  The Court highlighted the “express directive” from Congress in the Dictionary Act (1 U. S. C. § 1) that has defined “person” to include “corporations, companies, associations, firms, partnerships, societies, and joint stock companies, as well as individuals” since 1947.  As the Court stated, “[n]otably absent from the list of ‘person[s]’ is the Federal Government.”

The Court then rejected, as contrary to precedent, the Postal Service’s argument that the presumption only applies when the government is subject to liability.  And, according to the majority, the statutory text and legislative context did not override the presumption that the government is not a person because “[t]he Patent Act and the AIA refer to ‘person[s]’ in at least 18 different places,” with “no clear trend” as to whether “person” includes or excludes the government.

The Court also did not agree that the ability of federal agencies to obtain patents and utilize ex parte reexamination proceedings compelled a different result.  First, the ability to obtain patents, according to the Court, “does not speak to whether Congress meant for the Government to participate as a third-party challenger in AIA review proceedings” and there is no such longstanding practice for AIA reviews because the AIA was only recently enacted.  Second, ex parte reexamination was “fundamentally different” than AIA reviews because reexamination did not allow participation by the petitioner in the proceeding.  According to the Court, “there are good reasons Congress might have authorized the Government to initiate a hands-off ex parte reexamination but not to become a party to a full-blown adversarial proceeding before the Patent Office and any subsequent appeal.”

The Court then highlighted the “unique position” of the government among alleged infringers.  Specifically, the Court reasoned that federal agencies already face “lower risks” regarding patent infringement under 28 U.S.C. § 1498, and thus “it is reasonable for Congress to have treated them differently” from private parties.  The Court highlighted that the government, unlike private parties, benefits from limited damages (“reasonable and entire compensation”), no injunctions, no jury trials, and no punitive damages.

The Court also noted that to recognize a federal agency as a person would lead to the “awkward situation” of a patent owner defending “the patentability of her invention in an adversarial, adjudicatory proceeding initiated by one federal agency (such as the Postal Service) and overseen by a different federal agency (the Patent Office).”

Justice Breyer (joined by Justices Ginsburg and Kagan) dissented, focusing on reconciling the varying uses of “person” in the Patent Act as including or excluding the government based on precedent or logical context.  The dissent discussed the legislative history of the AIA as consistent with allowing a government agency to participate in AIA reviews and disputed whether the “awkward situation” identified by the majority was, in fact, awkward at all.

*Blair A. Silver represented the American Intellectual Property Law Association in filing an amicus brief in the proceedings.﻿ 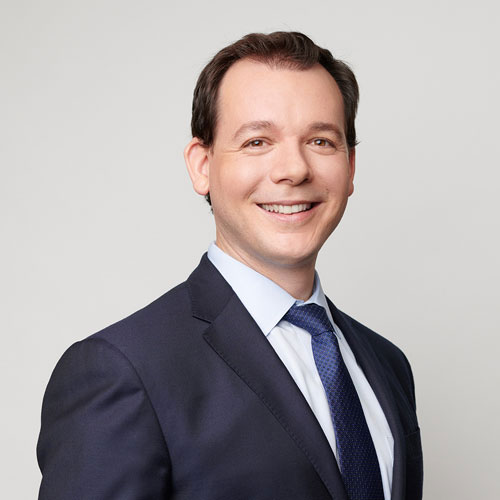